Hemingway App for desktops review: Promising, but probably not worth your money

A quick note: I used the Mac version for this review. I don’t have any particular reason to believe that the Mac and Windows versions are different, but you can take the appropriate grain of salt if needed.

Above is a capture of Hemingway App at work. We will get into more detail as we go, but you will immediately notice that it highlights sentences and words that require attention. Likewise, the app will give you a word count and an overall readability score. Generally speaking, per the advice of Hemingway App, lower scores are better.

There are two basic modes for use: write and edit. You can guess the use cases for each, with the highlighting and scoring features only visible in “edit” mode. At first glance, Hemingway App on the desktop is nearly indistinguishable from Hemingway App on the web. This can be a virtue or a curse, depending on your needs. I’ll break things down, feature by feature, from here.

The general look and feel of Hemingway App is rather spartan. This is not necessarily a bad thing, as the current trend in text editors is to be minimalistic. While the design approach is fine, there will be better options if all you really want is a simple text editor free of distractions. Hemingway App lacks the smoothness, typography, and overall attention to detail that makes a minimal text editor great. This is forgivable, of course, because Hemingway App is more than a text editor.

There are no options to customize the look and feel of the app, which is another thing that may or may not bother you depending your needs and expectations. The “write” mode, as seen just above this paragraph, is where you have the most minimalistic interface. The “edit” mode, which is at the top of this article and sprinkled throughout, obviously has more to look at. I don’t have any complaints about the way they have put together the proofreading look; it draws attention to the elements effectively and does a good job of layering when the same word has multiple criticisms.

The transition between writing and editing modes is smooth enough and, perhaps more importantly, quick. Some more sophisticated proofreading software takes quite a while to do its checking, but there is no discernible wait time with Hemingway App. One issue I do have when comparing the composition and editing modes is that since the writing mode hides the scoring and errors, there is a lot of wasted space on the side of the window.

Last but not least for the interface, sadly, are bugs. I haven’t figured out the exact cause of this just yet, but it happens just about every single time I use Hemingway to compose. As you can see in the screenshot below, the lines all mush together for no apparent reason. It took me a little while to figure it out, but all you have to do is press enter once or twice to get things back in line. I believe it only happens when you have filled the editor window, causing a need to scroll. Still, this is a needless problem. I wouldn’t hold out for a fix, either, since the app has gone without updates since it was introduced in the summer of 2014. 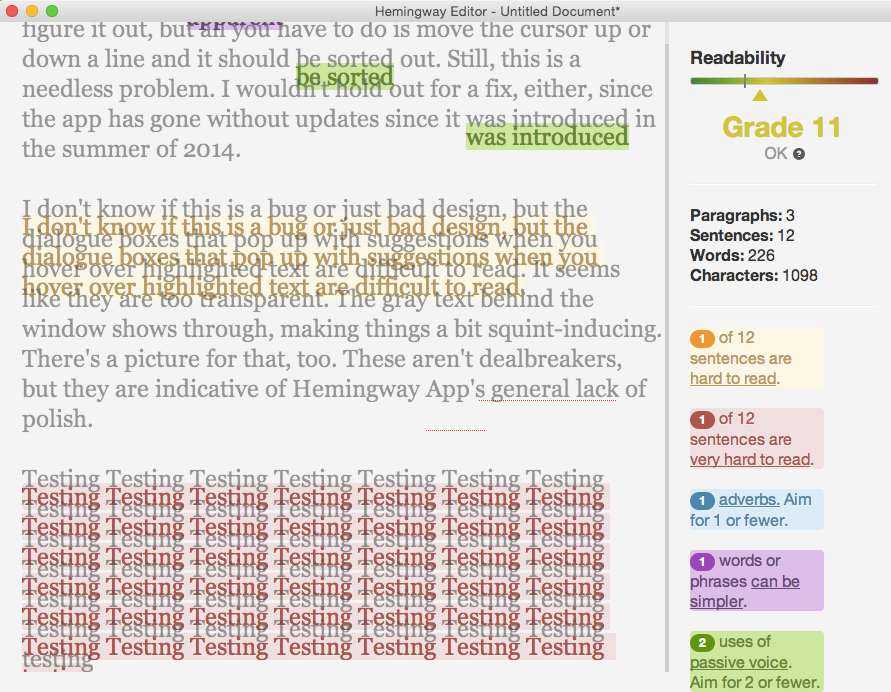 Legitimate competitors exist in this arena, like Grammarly and WhiteSmoke, both of which cost well over $100 per year. In that sense, they’re hardly competition to Hemingway App, because it doesn’t have to be better than Grammarly and the like. It just needs to be good enough for the kinds of people who would never shell out that sort of cash.

Hemingway App is legitimately useful. However, it is no replacement for careful proofreading or a copy editor. The most obviously useful tool it gives is the readability score, which is calculated via the Automated Readability Index. This is not a scoring method specific to this software, but rather a somewhat old way of matching a text’s difficulty to a US grade level. It is based solely on the average characters per word and words per sentence. You get a nice estimate, but as will become a theme in this review, this is far short of gospel.

Sometimes, Hemingway App’s more specific advice is wrong or inapplicable. See Exhibit A, below. All examples are excerpts from Strunk and White’s Elements of Style (1918).

In this simple example, the app has targeted the word “therefore” as one that should be simpler. The point of the purple-highlighted text from Hemingway App is to make sure you aren’t using unnecessarily complicated words. For instance, if you say someone was “fastidious” when you might be better off saying they were “neat,” this would be a welcomed comment from a proofreading app.

“Therefore” is not a very complicated word. It might indicate a complex sentence structure, but that isn’t the criticism from Hemingway App. More concerning is that the suggestions (ignoring the graphical glitch) would definitely make the writing worse. You can insert “thus” and “so” into the block of text and realize that. This error isn’t unforgivable, since we aren’t dealing with a human here. The problems do add up, though.

Active: I wrote my sentence in the active voice.

Passive: The sentence was written in the passive voice.

Generally speaking, active is better. Hemingway App is right to suggest avoiding passive voice. There are times where passive voice is better, though. Sometimes, the receiver of an action is more important than the actor. If the sentence is what you’re talking about, you may want to talk about the way the sentence was written rather than making a point of mentioning the author. Aside from my grammar commentary, there are issues with Hemingway App’s detection of passive voice.

In the sentence above, there is not a use of passive voice. “Sonneteers know” is an example of active voice. The highlighted portion, “are headed,” is not written in the passive voice either. “Headed” describes sonneteers; an alternative way to express this would be “Sonneteers head to a place they already know.” As it is, though, headed is an adjective. Sonneteers are going somewhere. The rest of the sentence tells us that they know where that place is.

Hemingway App probably makes this mistake because of the common misconception that any form of “to be” (is, are, am, etc.) indicates passive voice. The general advice from the app will tell you to limit uses of passive voice to a given number of times, which will vary depending on the length of the text. This is obviously arbitrary, but might be helpful. However, you will want to keep in mind the times that it counts something that is not passive as well as the possibility that it misses passive constructions. 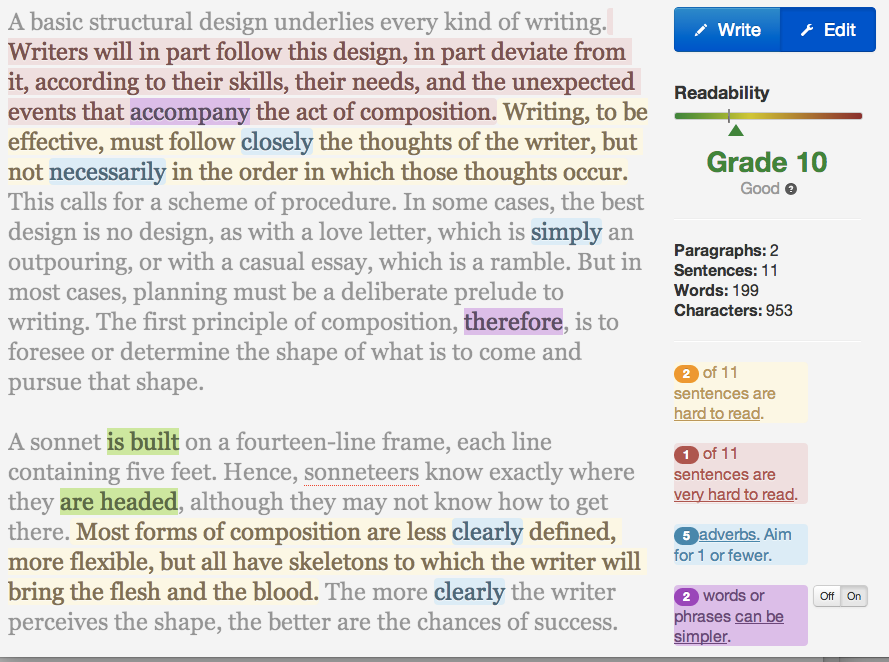 In the paragraph above, due to the length, Hemingway App says to reduce the 5 adverbs used to 1. While we could argue for the removal of some of them, none of the 5 adverbs spotted are all that heinous. Each adds to the clarity of the text and could not easily be modified by using a different verb.

I want to point out the app’s obsession with adverbs. Not specific to this software, it is old advice that dates back at least to our test material – Elements of Style. The logic is that, sometimes, adverbs are redundant or inefficient. That is, adverbs are often used to express an idea that the verb it modifies already did. Or, a different verb could make the same point without using an additional word. This is true.

The resulting advice is to try your hardest to avoid the use of adverbs. Most who are actually good writers would not endorse that advice, which is the same advice given by Hemingway App. Just like with passive voice, the app suggests limiting the use of adverbs with an arbitrary guideline. Some will be too jarred by the fact it highlights every single adverb to take the advice as cautiously as the developers may have intended.

Hemingway App offers a few things on the desktop that are totally non-existent on the web app. Most notably, it has Markdown support. For the unfamiliar, Markdown is a simplistic coding language for formatting text. Putting text between asterisks makes it italicized, two asterisks is bold, after a pound sign makes a heading. After composing your text in Markdown, the desktop app can export to an HTML file.

In my use, the export feature wasn’t worthwhile. More useful is the HTML preview, which renders the formatted text for you. From there, you can copy and paste elsewhere as needed. See below for an example of how the preview looks.

Beyond that, there isn’t much. You can open and save files, which of course is not true of the web version. This was appealing to me when I bought it, but I don’t use it this way because it pales in comparison to other text editors for writing. I now use it strictly for proofreading, so I save nothing from it. Be wary of the fact it offers no auto-save feature like in many modern writing programs. You will be warned that you have unsaved work when you try to close the app, but that may not be enough for some of us that just click through things.

Should you buy Hemingway App? It depends. A few things would have to apply to you:

Also, I wouldn’t expect any updates to the app. It has been out for at least six months and is still at version 1.0. It appears this is a more of a side project for the app’s developers. Buy it because it sounds good to you now, not because you think the kinks to be worked out over time. I should add that – despite no announcement via social media or other channels – the web app has had a beta update to its interface in just the past couple of weeks since I began preparing this review. I will reach out to the developers and see if the desktop app will receive any attention.

After spending more time with it, I do use it occasionally. It is a nice start to proofreading my own work, especially when I feel a bit burned out. Self-revision is difficult, but Hemingway App can put things in a different perspective. The fact that I disagree with some of its suggestions is good, because I am forced to debate and justify my writing decisions.

I never compose in Hemingway App, though. The bugs pointed out earlier become frustrating, as do the relative lack of features. There is no auto-saving in the app and you only get a light warning when quitting, meaning it wouldn’t be difficult to accidentally lose your work. For $7, I wouldn’t re-purchase an app that has such a narrow use. But so long as I have it, I will use it. The web app would work just as well for this use, making a purchase for you less justified.

I don’t like to give star ratings or a simple yes/no review. This could be worthwhile to some people and I’ve tried to make it clear who that would be. For most people, stick to the web version if you use it at all. If you think the benefits outweigh the negatives, pull the trigger.